letter to the President of the International Olympic Comittee

As promised at the Assembly General Meeting, an official letter to the President of the IOC has been sent to request one last time to be recognized as a non-Olympic sports by the IOC. The letter is included in the post.

To the President of the International Olympic Comittee

My name is Geens Walter and i am the current President of Naviga. Naviga is a Worldwide Organisation for Modelshipbuilding and Modelshipsport.

In such we promote and practise all forms of Modelships ranging from static models to radio controlled model boats. Our Organisation has members from all over the World, Most European countrys are affiliated to our Organisation and so are the Russian Federation and The Peoples Republic of China and the United States of America, In such Naviga is by far the largest Organisation for shipmodeling in the World.

I would kindly like to ask The IOC if there is a possibility to be recognized by The IOC as an non-Olypic sports, in analogy with the model aviation sports which has long been recognized by the IOC as a non-Olympic sports and what then the procedure for such would be?

Recognition by The IOC would mean a lot to many of our member countrys, for it would facilitate any possible support by their National Ministerie of Sports or Culture and would contribute to the further development and prestige of ship model sports,

I am at your disposal for any questions You might have for us, and remain hopefully waiting for a positive answer. 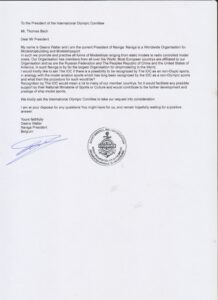